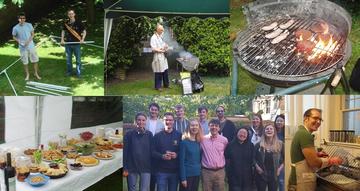 In usual times, we would be celebrating the end of the 2019-20 academic year with our annual BBQ behind 45 Banbury Rd, enjoying Mark Harrison’s supreme grilling skills alongside Belinda Clark’s magnificent pavlova.  But even if we can’t be together this year, I’m pleased to report that 2019-20 has been a productive and impressive year across the Oxford History of Science, Medicine, and Technology community.

We welcomed various new arrivals to the Oxford HSMT community: David Dunning joined us alongside Máté Szabo, both part of Ursula Martin and Chris Hollings' project on the history of mathematics and computing.  Federica Gigante joined the History of Science Museum as the new Curator of the Collection from the Islamic World, and we also welcomed Catherine Jackson as our new Associate Professor in the History of Science.  And although it’s not a competition, our smallest and most adorable arrival is Nathaniel, a baby boy born to Rod Bailey in March.

Many projects have begun and are ongoing: Over the last year Rob Iliffe's Newton Project has published about a million words of Newton’s unpublished writings, notably in the areas of his controversy with Leibniz (all scientific and non-scientific papers); his later theological writings, and his administrative work at the Mint.  The Newton Mint Papers Project began at the start of 2019 and it has already completed the transcription of all of Newton’s writings at The National Archives collection of Newton’s papers.  These include all of Newton’s interrogations of ‘clippers and coiners’ carried out between 1698 and 1705 (from no. 144 onwards).  A site dedicated to Newton’s work at the Mint, with maps of Newton’s London connections and graphical interfaces allowing users to explore the resources, will be available by the end of 2020.  Sally Shuttleworth’s Diseases of Modern Life has produced a fabulous array of publications, activities, and events, including the Contagion Cabaret, as has her Constructing Scientific Communities project.  Mark Harrison continues to head up the Wellcome-funded Malaria in Asia: Invisible Crises, Neglected Histories c. 1900-present, alongside The Oxford Martin Programme on Collective Responsibility for Infectious Disease.  Sloan Mahone has started two new projects on global approaches to epilepsy, one at Oxford’s Martin School and one funded by the NIHR.  Viviane Quirke is about to begin her project 'Wonder Drugs, Magic Bullets, and Miracle Cures: Drugs at the intersection between science, magic and religion', while Amanda Power’s truly interdisciplinary Climate Crisis network continues to encourage new research approaches.  Matthew Landrus was kept busy across 2019 as it was the 500th anniversary of Leonardo da Vinci’s death; Matthew gave over twenty major talks and lectures, consulted on scripts for various television and magazines, and curated Leonardo exhibitions at the Ashmolean and elsewhere.  OCHSMT also continues to host two international projects, even with events postponed to 2020-21: TORCH’s Creative Cities: Knowledge of Nature and Networks of Science, and War Losses - Pertes, which builds on our strength in the history of war and medicine.  With Mark Harrison as co-director of Oxford’s Wellcome Centre for Ethics and Humanities (WEH), many of the OCHSMT’s members continue to enjoy being part of both interdisciplinary groups and working together on associated projects.

As always, there is an impressive range of publications relating to the history of science, medicine, and technology.  In terms of monographs: Simukai Chigudu published Political Life of an Epidemic: Cholera, Crisis and Citizenship in Zimbabwe; Tom Scott-Smith published On an Empty Stomach: Two Hundred Years of Hunger Relief; Chris Hollings published Meeting under the Integral Sign?: The Oslo Congress of Mathematicians on the Eve of the Second World War; and Claas Kirchhelle published Pyrrhic Progress: The History of Antibiotics in Anglo-American Food Production.  But there have also been plenty of articles, chapters, and essays that demonstrate the breadth of our discipline: Alice Marples’ 'James Petiver's "joynt-stock": middling agency in urban collecting networks'; John Lidwell-Durnin’s ‘Cultivating famine: data, experimentation and food security, 1795–1848’; Rod Bailey’s examination of the history of facial surgery and human enhancement in the BMJ; and Pietro Corsi’s ‘Evolutions. Authors, Theories, Readers’ for the catalogue that accompanies the Musée d’Orsay’s spectacular Les origines du monde. L'invention de la nature au XIXe siècle to name a few.

Oxford’s HSMT group can also boast of some impressive successes: Claas’s Pyrrhic Progress was awarded the ICOHTEC 2020 Turriano Prize, and his Alice in Typhoidland film – part of the fantastic Typhoidland exhibition and website – won the Bristol Science Film Festival 2020 Professional Science Fact Film Prize.  The History of Science Museum’s superb Multaka-Oxford programme won a number of awards, including the 2019 Collections Trust Award and a 2020 Oxford Vice-Chancellor’s Award.  Martin Robert’s PhD thesis was awarded the Prix Sournia by the SFHM; Taline Garibian was awarded a British Academy Postdoctoral Fellowship (to begin Oct 2020); and Rob Iliffe held a Princeton Institute for Advanced Study Fellowship across 2019-20.  Margaret Pelling gave the 2019 Dyason Lecture for the Australasian Association for the History, Philosophy and Social Studies of Science: I recommend you all read this not only to learn about the early years of our discipline, but also to get a flavour of being an HSMT Oxford doctoral student in the 1960s.  We are also immensely proud of our students who successfully completed doctorates this year: Hana Oh for ‘Connecting the British Pacific: Naval Surgeons in the Mid-Nineteenth Century Pacific’ (July 2020), Rhea Sookdeosingh for ‘Re-Thinking the History of Anorexia Nervosa’ (Rhea is now part of Birkbeck’s ‘Sexual Violence, Medicine, and Psychiatry’ project), and Netta Cohen for ‘Jews and Climate Science in Palestine, 1897-1948’ (Netta is now a JRF at Christ Church, Oxford).  And, some late-breaking news: at the very end of July and the day after Harriet Mercer submitted her doctoral thesis on the history of climate science in Australia, she gave birth to a healthy baby girl.  Congratulations to Harriet on these two achievements.  Last but not least, Jim Bennett, retired Director of Oxford’s History of Science Museum, was awarded the History of Science Society Sarton Medal, its highest honour, in recognition of “his pioneering scholarship and curation in the field of instrument studies, his leadership in the history of science on an international stage, and his attention to the needs of faculty, students, and the public”.

Throughout 2019-20, the Centre hosted and co-hosted a variety of events and activities: the History and Philosophy of Physics Centre was characteristically active, with its next event – a Nobel Laureate Discussion Panel on The Greatest Physics Discoveries of the 20th Century – scheduled for 31 July.  Cressida Jervis Read and Gordon Barrett continued their ever-popular Writing Group, which went virtual during lockdown.  And indeed, lockdown did not stop our events: our weekly seminars went fully online; the Managing Airs and Climates workshop was an online success; and via TORCH’s impressive transformation into an online digital platform, you will see some familiar faces in the Medical Humanities and Science and Humanities themes.  Going virtual was no problem for our master’s and doctoral students, who ran their annual conference online in June, complete with its ingenious cover and title ‘Going Viral’.

Although lockdown slowed much of life and research, some of us working on the history of disease and related areas were, perhaps unsurprisingly, called into action.  Mark Harrison, as one of the world’s experts on the history of pandemics, the politics of medicine, and disease in Asia has been unflinchingly hard at work behind the scenes, a tangible demonstration of the significance of historical expertise.  It was also a pleasure to work with Jerry Ravetz and others on the context of modelling – a recurrent theme in responses to COVID19.  With John Lidwell-Durnin, we hosted a popular and meaningful online HSMT reading group that brought together students, ECRs, and colleagues; many of them in lockdown all over the world.  Bringing together historical research and analysis from experts on quarantine, public health, emerging diseases, and contagion from a range of historical periods and regions, I was pleased to co-edit a special Centaurus issue on the history of science and medicine in the context of COVID19, written, reviewed, and published in short order and now freely available online. And throughout its temporary closure, the History of Science Museum continued to expand its superb online engagement: along with a virtual tour, you can have the brilliant Stephen Johnston as your own Pocket Curator.

The end of an academic year also means we must say farewell to students and colleagues: among an outstanding group of master’s students, we note that Jasmine Brown is about to begin medical school at the University of Pennsylvania; Levi Hord will begin a PhD in English at Columbia University this autumn; Alexandra Houston will soon start a multidisciplinary European Master’s in Public Health from the Erasmus+ Programme; while Nikita Arora and Dan McAteer will remain in Oxford for DPhils in History.  We wish all of our students well and we hope you will stay in touch.  We also say a fond farewell to Moujan Matin, who has started a research fellowship on ‘Playing with Fire: The Discovery of Ceramic Glazes’ at the University of Toronto; to Lee Macdonald, who is soon to begin a research fellowship with Royal Museums Greenwich; and to Mateja Kovacic, who is now assistant professor at Hong Kong Baptist University, where she teaches the transnational history of animation and STS.  Congratulations to Claas Kirchhelle on his appointment in January 2020 as Lecturer in the History of Medicine at University College Dublin – but we are also pleased that he continues his activities in Oxford, still part of the Oxford Martin School as well as the Department of Paediatrics / Oxford Vaccine Group.  Finally, we bid au revoir to the Maison Française d’Oxford’s visiting researcher in History of Science – Marie Thébaud-Sorger – who organized so many wonderful events during her three years with us, and who has also become a dear friend and colleague.

The past few months have been unusual, but often also stressful and bewildering.  I am grateful to students and colleagues who adapted to ever-changing circumstances and who have often put in extra hours and made extra efforts to support one another.  Sending you all best wishes for the summer months and next academic year.

Erica Charters, Director of Oxford’s Centre for the History of Science, Medicine, and Technology
July 2020