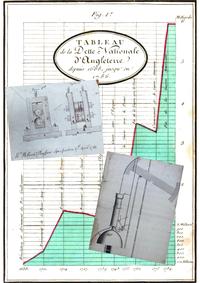 Among the many illustrations of the continuous flow of intellectual, scientific and technical exchanges between Great Britain and France during the 18th century, the Scottish engineer, inventor and pamphleteer William Playfair (1759-1823) provides a remarkable case-study. Himself deeply rooted in the Scottish Enlightenment through his family background and connexions, trained under James Watt and Matthew Boulton in the heart of the industrial revolution, a protégé of Shelburne and a qualified (though unlucky) London businessman and industrialist, Playfair’s first move to Paris in 1787, initially motivated by an attempt at exporting his recent invention, i.e. statistical charts, to France, was the occasion of a display of his multifarious talents.

The Scotsman’s initial missteps on the path to official patronage, would prompt an alternative course up to the Académie des Sciences and government-sponsored industry. Marshalling his networking skills and varied expertise, from ‘linear arithmetic’ and graphs to steam-engine and technical invention, Playfair would eventually make his way in ancien regime France.

This paper tackles, through this particular case study of an agent of transfer, a pluri-factorial account of the various processes at stake in the circulation of science and the industrial revolution, as well as the social making of expertise at the end of the eighteenth century.