The Oxford Centre for the History of Science, Medicine and Technology and the Wellcome Centre for Ethics and Humanities invite you to participate in a second workshop on the theme of ‘Virus and Hate’, following our successful introductory workshop with Polish poet and musician Grzegorz Kwiatkowski, in March 2021.

This workshop will focus on one of the most devastating episodes of genocide ever perpetrated – the Rwanda genocide of 1994. It will consist of an interview with Alan Hawley who was medical commander of the 650-strong British contingent sent to Rwanda to stabilise the situation. The interview will cover his views of the politics, realities and ethics of the situation in Rwanda, paying particular attention to the sources of hatred and how he and others attempted to come to terms with it. The interview will be interspersed with readings of poetry reflecting on the themes of genocide and hatred, including newly translated poetry by one of the interviewers, Grzegorz Kwiatkowski. 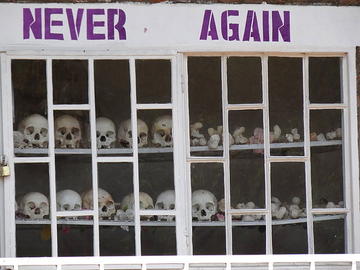 This event is organised by the Oxford Centre for the History of Science, Medicine and Technology and the Wellcome Centre for Ethics and Humanities

Major General Professor Alan Hawley, CBE, studied medicine at the University of Birmingham and then joined the British Army as a doctor. His military experience included the command of the Parachute Medical Regiment and operational experience in Northern Ireland, Bosnia, Kosovo, Rwanda, Sierra Leone, Afghanistan and Iraq. He was the medical commander in most of these deployments which made him the most operationally experienced British Army Medical Commander since the Second World War. He completed 34 years of service and left in 2009 to take up a Professorial appointment in Disaster Studies. He has just begun part-time study for a doctorate in History at the University of Oxford.

Grzegorz Kwiatkowski (b. 1984) - a Polish poet and musician, an author of several books of poetry revolving around the subjects of history, remembrance and ethics. He is a member of a psychedelic rock band Trupa Trupa. He has been a beneficiary of numerous international literary programs such as "Artist in Residence" in Vienna and "Styria Artist in Residence" in Graz. "Grzegorz Kwiatkowski was also a guest lecturer at the University of California, Berkeley; Stanford University; Johns Hopkins University; the University of Chicago; Jewish Theological Seminary; the University of Cambridge and the Ted Hughes Society (“Crow at 50”); The University of Texas at Dallas and Miroslaw Balka’s Studio of Spatial Activities at the Academy of Fine Arts in Warsaw."

Grzegorz is a member of a European literature platform Versopolis and was a guest of a number of festivals such as Oslo Internasjonale Poesifestival and Lahti International Writers Reunion. His music and literary works have been published and reviewed in The Guardian, Modern Poetry in Translation, New Poetry In Translation, CBC, Pitchfork, Los Angeles Times, Rolling Stone, Newsweek, Billboard, Spin, Chicago Tribune, Times, NPR, BBC and KEXP. As a musician, he performed with his band at such events as Desert Daze Festival, Rockaway Beach Festival, SXSW, Primavera Sound and Iceland Airwaves. Trupa Trupa's songs are regularly broadcast on radio programmes hosted by Iggy Pop or Henry Rollins. The band was also invited to take part in a legendary NPR Tiny Desk session. Its music has been published by global record labels such as Sub Pop, Glitterbeat Records, Ici d’ailleurs and Lovitt Records.

Grzegorz Kwiatkowski's grandfather was a prisoner in Stutthof, the Nazi concentration camp east of what used to be the Free City of Danzig. Later he was forced to become a Wehrmacht soldier. His poems explore not only conflicted pasts of Central and South-Eastern Europe (for example, the Nazi T4 Euthanasia Program), but also the paradoxes of contemporary genocides, for instance in Rwanda. He is intrigued by the combination of ethics and aesthetics in one person, one life, one story. His minimalist poems have been perceived as quasi-testimonies, 'full of passion, terror and disgust', provocative and lyrical utterances delivered by the killed and the dead. Ultimately, they become portrayals of Death.

These poems are brutal, strangely exquisite, and, unfortunately, still necessary. With his words and his music and his relentless campaign of stark honesty and regenerative connection, Grzegorz Kwiatkowski is a genuine glimmer of hope in a darkening world. Sam Lipsyte

I have found these poems to be emotionally compelling and profound. I expect fellow readers will enjoy this beautiful work. Imani Perry

Grzegorz Kwiatkowski once said, “I think that we should be conscious about the evil that is inside every one of us.” In his collection Crops, Kwiatkowski’s taut, tense poems sound the depths of our darkest history. Masterfully rendered by Peter Constantine, one of our most brilliant translators, Crops reveals that the unforgettable is also the undeniable. Is it beautiful? I say it is powerfully necessary, unrelentingly direct. I say it burns. Richard Deming

In these searing, darkly beautiful, indelible poems, Kwiatkowski reminds us of what, at our peril, we must not forget. Cynthia Zarin

Mark Harrison a historian of medicine who specialises in issues relating to war, imperialism and civil unrest. He is a Co-Director of the Wellcome Centre for Ethics and Humanities and Professor of the History of Medicine at the University of Oxford. He has recently been working on violent protest during the Covid19 pandemic.