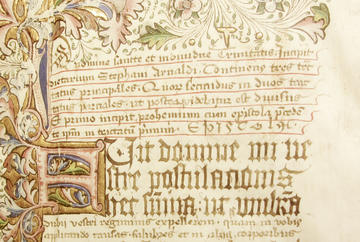 To a large extent, the history of medieval medicine has been written from the point of view of medical books produced in the Middle Ages: taught in schools and then in the universities, this discipline, distinguished by its dual status of science and art, gave rise to a wide range of texts and discursive genres reflecting its vitality. This corpus, now distributed among many libraries, was the subject of a census work initiated in the 1920s by the American historian Lynn Thorndike with the help of Pearl Kibre. Then other studies set out to inventory the works in certain collections, medical productions in vernacular languages or to identify the many anonymous texts kept in miscellanea books and often very poorly catalogued. But except few works on medical books as technical writings, on illustrated medical manuscripts or on collections of miscellanea, it is difficult to find a general reflection on the specificities of medical manuscripts.

Medieval medicine, because of the plurality of fields it covers (dietetics, pharmacopoeia, surgery, etc.), the diversity of the places where it was produced (monasteries, universities, courts, urban environments), the variety of its readership and the languages in which it was written, was disseminated in a wide range of handwritten books which deserve new attention. This research programme will be less a question of studying these objects for the knowledge they contain and transmit, than of favouring an approach to the history of the book that gives pride of place to their materiality. It could inform us as much about the conditions of their production and the reasons why they were made as about the uses and readings that were made of them and the environments in which they circulated.

With the support of the Maison Française d'Oxford and the CIHAM