We recommend using Google Chrome when booking or using WebinarJam 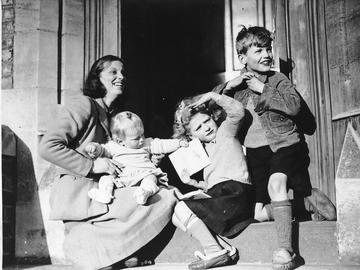 Dorothy Crowfoot Hodgkin with her children Toby Liz and Luke on the announcement of her fellowship of the Royal Society in 1947. Credit: Oxford Times

Minerals, molecules and the Nobel Prize: Dorothy Crowfoot Hodgkin at the University Museum

Dorothy Crowfoot Hodgkin (1910-1994) remains the only female British scientist to have won a Nobel prize (Chemistry 1964). She won it for using the cutting-edge technique of X-ray crystallography to visualise the internal structure of the medically-important biological molecules penicillin and Vitamin B12. She carried out this work not in a modern chemistry laboratory, but in a small basement room in the University Museum (as it then was), originally as part of its Department of Mineralogy. In this talk I will investigate the subterranean origins of a technique that now commands massive resources (including the Diamond Light Source near Didcot), and show how Hodgkin single-handedly launched Oxford as a centre for the study of the living body’s molecular components.

Georgina Ferry is a science writer, author and broadcaster. She has been a staff editor and feature writer on New Scientist, and a presenter of science programmes on BBC Radio. A revised edition of her 1998 biography of Dorothy Crowfoot Hodgkin, which was shortlisted for the Duff Cooper Prize, was published by Bloomsbury in 2019 as Dorothy Crowfoot Hodgkin: Patterns, Proteins and Peace. She is a regular contributor to publications including The Guardian, Nature and The Lancet, and was Writer in Residence at OUMNH during its 150th anniversary year in 2010.

The Oxford University Museum of Natural History online lecture series features researchers presenting a range of topics in natural history. Beginners and experts are welcome, and while the talks may not be suitable for young children, they are appropriate for adults and young people. Our online lectures are presented live, and you will have opportunities to interact with other attendees and ask questions to our expert speakers.