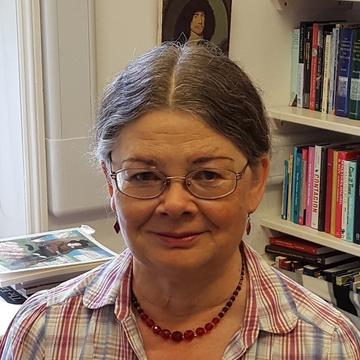 I should really call this ‘a fortunate life’. My academic career has been shaped by a series of potential disasters, lucky accidents, and interventions from generous, imaginative and inspiring people. Along the way, it shows how much graduate studies have changed in the last few decades.

Like many in our field, I thought I was destined for medicine. There were medical types in my family, notably my mother’s parents, and from an early age I read for pleasure popular classics like Zinsser’s Rats, Lice and History and Thorwald’s Century of the Surgeon. There was one major fault in this programme: I hated (and was no good at) all the basic sciences except for biology. My only excuse was that both physics and mathematics were poorly taught in my otherwise excellent all-girls school. Consequently I emerged from secondary school with bizarre and contrasting results, and no idea what to do next, except that it certainly wouldn’t be medicine. Fortunately a family friend, Diana Dyason, was head of the History and Philosophy of Science department at the University of Melbourne. Diana had a strong personal interest in the history of medicine, which she fostered by giving access to her own library, and clearly spotted a likely recruit. She concocted for me a joint four-year course in HPS and English Literature, then an unheard-of combination, and encouraged me to specialise in HoM for my final two years. (This, incidentally, was only possible because of Commonwealth Scholarships.) At that time HoM hardly existed in Australia, except as a side-line for a few interested medical men and as light entertainment for grabbing the attention of medical students. Near the end of my degree Melbourne was visited by representatives of the Wellcome Trust, with a view to funding a room and library devoted to HoM, but discussions were held with the medical school, not with HPS. It is also worth noting that Diana, although an inspirational head of department for many years, was never promoted to a professorship; this was reserved for her (male) successor.

By the end of my course it was evident that I was better suited to HoM than to English Literature, which was going through a dogmatically anti-historicist phase. Post­graduate qualifications were then ad hoc and relatively rare. Our HPS department was able but among my teachers only one, Elizabeth Gasking, had a PhD and she was further distinguished by having published a monograph. These were not essential requirements having to be acquired at an early stage as they are now. As a result, the bureaucratic machinery for applying and being selected for post-graduate study was often very limited. This may have been less the case in the major centres for HoM overseas, notably McGill and Johns Hopkins, and these were perhaps the obvious places for me to approach. However, I had already begun a master’s thesis on English nineteenth-century public health and theories of disease, and was further influenced by two contacts. My English Literature teacher at school, Lorna Osborn, who amazed me by treating me as an adult, regularly spent time in Oxford; and Diana knew Rom Harré, a fellow-Antipodean who was at Linacre College, then very new. There was some discussion as to whether I should go to one of the London HPS departments, but these were regarded as being in a precarious state. All I remember of the application process was writing and receiving blue airmail letters from the Principal of Linacre, John Bamborough. At home, Diana and my senior aunt, both formidable and pioneering academic women, ganged up on my poor father (who tended to think that universities were ivory towers) and persuaded him to subsidise me for a year away. Suffice it to say that finances were always precarious, and I ended up in debt to my friends. I did obtain a year’s funding from the Wellcome, again on an ad hoc basis, as the Trust was more or less opposed to supporting post-graduate study.

It is fair to say that at that time post-graduate life at Oxford was itself ad hoc. Tremendous care and resources were devoted to undergraduates, but post-graduates were expected to be almost entirely self-sufficient. It was up to them what they did. There were no staging posts of assessment like Transfer or Confirmation of Status. There was no word-limit on theses, and one candidate before my time was said to have submitted his using a wheelbarrow. You began as a BLitt, and all being well progressed to a DPhil. Supervisors were meant to submit termly reports, but this was not rigorously enforced. According to present-day criteria, I should not have been accepted at all, because there was no-one at Oxford to supervise me. My first supervisor, Jenifer Hart, a historian of nineteenth-century British politics, was both scrupulous and kind, and said after a year that she did not know enough about my subject to take me further. By a process obscure to me I was moved to a second supervisor, Alastair Robb-Smith, who was a pathologist near to retirement and had published on medical history in Oxford. He was scholarly but of the old school, and could not believe that looking at the full spectrum of views at any given time was worth doing. To put it crudely, those who got it ‘wrong’ should be allowed to fade out of the historical record, and what I was focusing on was therefore ‘a nonsense’.

Hence disaster again loomed, and I told John Bamborough that I had run out of time, money, and confidence, and would have to leave. Fortunately, he was seriously annoyed by what he saw as interference in my supervisory arrangements, and found an alternative: Charles Webster, then a research fellow at Corpus, who proceeded to rescue the situation. As a result, I was in the right place and qualified in the right subject (still unusual) when the Wellcome Unit was set up in Oxford. It was not plain sailing thereafter, far from it: like most post-docs today, we were always on ‘soft’ money, and there were continual uncertainties and periodic crises. But we had humour, esprit de corps, and a strong sense of direction in terms of the social history of the subject. And when I came to have my own graduate students, I tried to follow the best examples set for me, and found this form of teaching one of the most rewarding, and improved, areas of academic work.