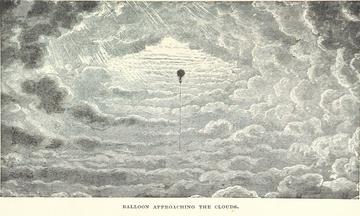 Managing Airs and Climates: New Approaches from History and Beyond

At the end of May 2020, the Oxford Environmental History Network in collaboration with the Maison Française d’Oxford hosted the online meeting ‘Managing Airs and Climates: New Approaches from History and Beyond’.  The aim of the meeting was to discuss and debate the way historians use the concepts of air and climate in their research and writing. The participants were asked to respond to several questions:

These broad questions were chosen to help query the assumptions about the distinctions between air and climate which tend to be made in historical research and writing. To further help question these assumptions, the workshop brought together scholars who work on different historical periods and places – from nineteenth and twentieth century Palestine to medieval Europe – as well as different disciplines – from history to literature and anthropology. What follows is a brief summary of the points raised by these scholars.

In his talk the historian Vladimir Janković focused on historical and contemporary ways of managing air in designed spaces by looking at technological and planning solutions to confront ‘hazardous’ airs and climates. Amongst other things, Janković addressed various solutions of how to manage air in urban design through the lens of scale. He discussed air conditioning technologies developed at the turn of the twentieth century and environmentally friendly houses in vernacular architecture. He also provided an outline of the role of  ‘urban climatology’ in thinking about ‘air management’ in relation to air pollution and commented on the results of his project on the history of wind paths (kaze-no-michi) designed to provide street-level ventilation in Tokyo, Rio de Janeiro and Stuttgart.

Lecturer in English literature, Rowan Boyson, discussed the role of air as a political subject by referring to how air has been historically used as a metaphor for freedom during the early modern and modern periods. She outlined a project of drawing a political history of the atmosphere (including air pollution anxiety) in the long nineteenth century. Boyson emphasised the conceptual link between air and democracy on the one hand, and the pollution of air and slavery and colonialism on the other. She pointed out that air has been used as a common metaphor for freedom while restricted access to air has been used in campaigns against slavery.

Harriet Mercer, a doctoral student in history, discussed how the experience of conducting archival research during the 2019 to 2020 Australian bushfires changed the way she thought about her use of the concepts of air and climate in her research. She discussed the way the bushfire crisis linked the smoky air she breathed on the street and in her home to the broader changes in climate that helped create a particularly ferocious fire season. She discussed the way this linkage prompted her to not simply assume that air was local and climate was global, but rather to treat that kind of scalar thinking as a historically contingent, shaped by events such as bushfires and indeed the corona virus crisis too.

The historian of early modern Europe, Sara Miglietti, shared with us her findings on the intellectual and political history of ideas of environmental influence on human bodies and characters, as they are manifested in early modern European scientific and literary texts. Whilst some historical research tends to be anachronistic especially in its use of the concept of climatic ‘determinism’, she advocated examining the numerous ways in which people in early modern Europe sought to assert their moral agency vis-à-vis perceived environmental influences on their physical health and cultural identity. Her talk focused on various historical concepts and techniques of managing air such as diet, relocation, moral education, change of landscape and other governmental and bio-political techniques.

Historian of science and technology, Marie Thébaud-Sorger, explored the interplay between European societies in the eighteenth century, inventive practices, and knowledge about air in the context of the rise of pneumatic chemistry, which changed the perception of air and breathing. The design of artefacts intended to improve everyday life (such as ventilation, artificial respiration, gas masks) shaped both the intellectual boundaries of ‘air’ and the social world around them, through the understanding of a more global system of gaseous exchanges (for instance oxygen/carbonic acid). She pointed out how the category of noxious air became a political issue that situated the government of individual bodies in a global sanitary and social policy, fostering a new technical performativity, where the desire to change atmosphere and control it seemed to be able to carry out “counternatural” actions.

The historian of medieval Europe, Amanda Power, presented her recent work on the medieval history of the Anthropocene. She argued that it is important to bring pre-modern discussions to the fore since humans have long had to respond to shifting climates (especially in agrarian societies) and managing the relationship between humans and air/climate has always been relevant for societies. She discussed her interest in the ways in which the management of air and climate is led by structures of knowledge that tend to prioritise non-local knowledge and the pursuit of profit. One example for such a dynamic is the wood burning regulations imposed on indigenous societies on the one hand and the modern timber industry and forest management which leads to lack of biodiversity and increased air pollution on the other.

Anthropologist Javier Lezaun discussed the management of air and climate through the prism of mosquito control. Lezaun described four main techniques to cope with mosquitos while alluding to both their theoretical and practical implications and significance. Among these techniques he referred to natural means to eliminate mosquitoes including the use of smoke and specific plants, chemical methods including repellents, design and architectural methods. The question of how the air around a human was managed through the use of such technologies led Lezaun to consider at a larger scale how geo-engineering today aims to tackle climate change by reorganising gases from the atmosphere and treating the atmosphere as a new frontier of extraction.

Netta Cohen, a Junior Research Fellow in history at Christ Church College, argued that the distinction between air and climate as different atmospheric realities is based on the principle of scale. While air is perceived as a local and tangible reality, climate is usually looked at through larger territorial units (often even global ones) and is understood as a theoretical concept. According to Cohen, the birth of climate as a concept goes back to the first colonial encounters of westerns with new and unfamiliar environments. Cohen also referred to contemporary ‘successes’ in air management during the corona crisis and called for downscaling climate in order to gain similar results in the fight against climate change.

The political scientist, Michael Drolet, presented his recent work on the late-nineteenth-century relationship between political thought, science and utopian ideas in France which were associated with the improvement and management of air and climate. He pointed to a shift between the legacy of the eighteenth-century physiocracy conception of political economy grounded on agriculture toward the over-exploitation of earth which led to the marginalisation of this idea of circular economy. Drolet referred, among other things, to the perceived role of forests in fixing climates and air quality both in the metropole and in the colonies, feeding the awareness of the consequences introduced by this new management of nature (for instance the deforestation of ile Maurice).

In all, the meeting underlined the importance of discussing the concepts of air and climate across different fields of history as well as across different disciplines. It explored the different layers of the materiality of air, from local to global climate management. On the one hand, there was discussion of the "small-scale" of atmosphere technical management including the distinction of the domestic sphere and indoor/outdoor spaces; while on the other hand there was also a focus on the long-term legacies and shifts in dealing with air in the  management of global resources (such as forests), economic growth and colonial expansion. Territorialisation also emerged as a crucial issue. Speaking of airs in the plural seemed to reflect the fact air has long been locally defined (such as waters or winds) through its locality and peculiarity.

What ultimately emerged from these interfiled and interdisciplinary discussions was the importance of treating air and climate as historically contingent concepts - that is, as concepts that have changed meaning over time and place. Reflection on how the categories of air and climate have changed in different times and places will help researchers reflect on the assumptions embedded in these categories today. Such reflection is particularly timely given the current context of air management associated with covid-19 and the climate management linked to the current era of anthropogenic climate change.